Unlike the "regular" broken gene/pattern and the English Spot pattern, the Dutch pattern requires homozygous rabbits to express fully as the belted Dutch pattern we know and love.

There are actually different "Dutch pattern genes" but they are beyond the scope of this series. This is a simplification in no small part to help breeders understand why crossbreds often lack the iconic Dutch pattern. 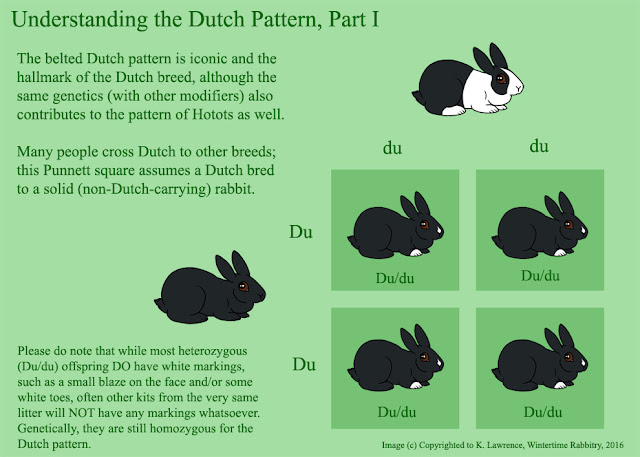 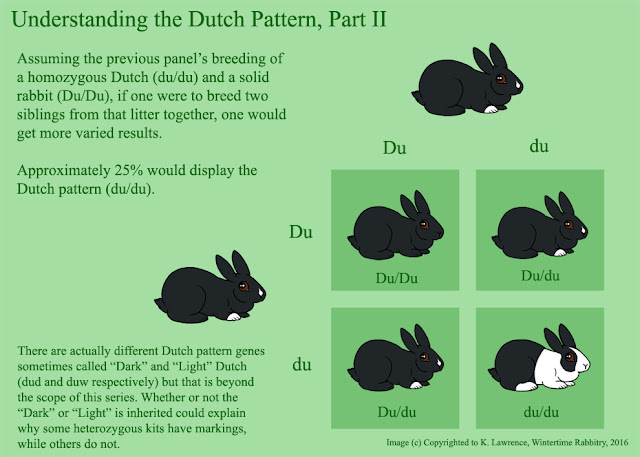 Please do be aware that even if a rabbit is genetically "perfect" the actual physical markings may vary. Mismarkings are common, and can be as simple as a tiny dot of color in the white belt or a lopsided blaze. Each animal must be judged on it's own merits. Also, color does not take into account conformation, which should be one of the most important aspects of breeding.

Crossbreeding Dutch is often done by people breeding for pets or for meat (Dutch are a shockingly meaty rabbit for their size). I personally have examined four different litters of rabbits where one parent was a Dutch (du/du) and the other was a non-Dutch/normal rabbit (Du/Du). In those breedings, roughly half of the kits had some sort of white marking, be it a white nose mark, a white foot, or a white blotch on the chest or back. However, the other half of the kits had no white whatsoever.

For a rabbitry of small size looking for small meat rabbits, crossing Dutch to Florida Whites is an option. Depending on what genetics the Ruby Eyed White Florida rabbit(s) are hiding, the litters could be very unique and possibly colorful, especially if bred back to a Dutch parent or in subsequent sibling-to-sibling matings.

CLIFF'S NOTES FOR THE DUTCH PATTERN:

Lastly, something to keep in mind is that the percentages listed above are for EACH KIT, not the litter as a whole unless the result is 100% foolproof. This means that each kit in a litter of, say, Dutch to Cross mating, has a 50% chance of being Dutch. As such actual litter percentages may vary!

If you have any further questions, please feel free to comment below!
Posted by K. Lawrence, Wintertime Rabbitry at 6:39 PM