Be aware that dwarf genes are in many breeds and in fact are desirable for show purposes in a number of smaller breeds, such as Mini Rex, Netherland Dwarf, Jersey Wooly, Holland Lop, and Lionheads, just to name a few! 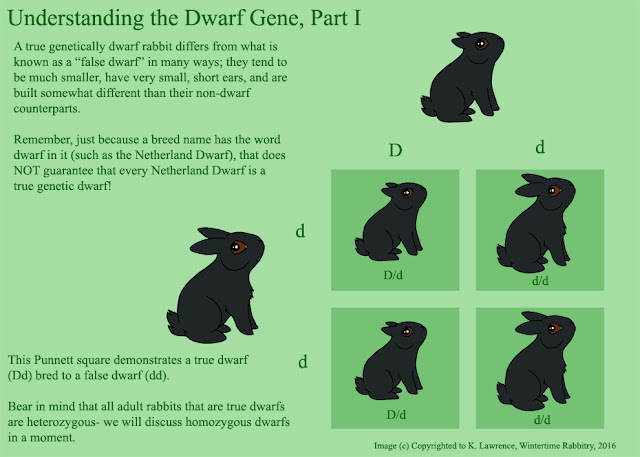 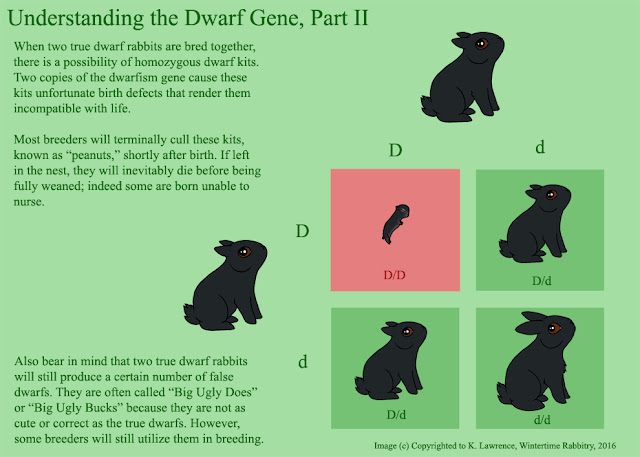 A quick discussion on breeding dwarf-to-dwarf:

Do not be hasty to judge a breeder who does dwarf-to-dwarf matings, because usually it is the dwarf rabbits who are more correct for the breed and likely have a show record, whereas the larger false-dwarfs might never see a show table in their lives. I know that when I bred Mini Rex, I had very limited space and could only have a few rabbits; thus every breeding rabbit I owned by necessity had to also have a show career. I simply did not have the space nor time to devote to false dwarfs. I personally preferred to cull peanuts within a day to three days of birth, but some breeders choose to let nature take it's course and thus some rare peanuts survive almost to weaning. No peanut survives past weaning age, however.

Also, bear in mind that some rabbits are true dwarfs but do not look like it! I know of a breeder who had a doe that was assumed to be a false dwarf...until she produced a peanut when bred to a dwarf buck! This is uncommon (most genetically true dwarfs are visibly smaller and shorter ears, often with a more blocky head) but not unheard of.

Here are some photos of peanut kits next to normal kits, to show both how grossly undersized they are and also to highlight their common deformities. 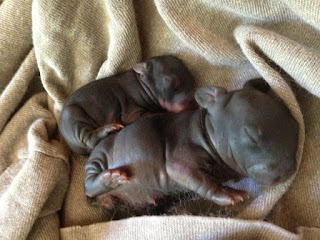 Above is a shockingly well-formed peanut kit next to a normal littermate. Though this peanut is less deformed than most, he is still much smaller than the normal-sized, viable kit. Incidentally, the normal kit in this picture is a proven genetic dwarf (heterozygous of course). 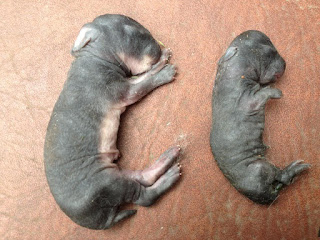 Deceased runt versus deceased and deformed peanut, side by side.
From the Wintertime archives.

Above are two day-old kits, both born alive but both of whom died in their first night. The kit on the (viewer's) left is a very, very small runt but still has normal body proportions. This picture simply highlights the physical differences between normal, viable kits and their deformed peanut brethren. As you can clearly see, the peanut kit on the (viewer's) right is very deformed, typical of peanuts; note the severely underdeveloped hindquarters, domed head, and excessively tiny and underdeveloped ears. 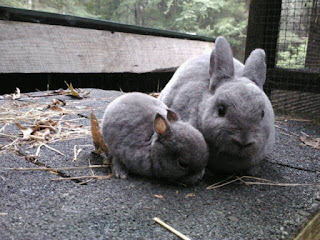 Peanut kit next to her normal, viable littermate.
Photo by S. Sousa, used with permission.

Some less-deformed peanut kits survive for several weeks; as long as they are able to adequately nurse, they may continue to live. Some extremely lucky peanut kits grow old enough to open their eyes and explore with their littermates! Seen above is the oldest, most well-developed peanut I have been able to find; she is pictured here with her normal, viable littermate. Even so, notice how different her head is shaped, and how tiny her ears are! In this photo, these kits are almost ready to be weaned from their mother- that is the cutoff age for peanuts. Some theorize that their digestive systems simply cannot cope with solid foods. The exact method of demise for less-deformed peanut kits is, as far as I know, unknown. 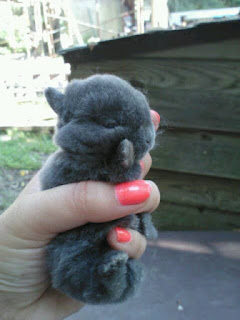 Look at how incredibly tiny she is!!
Photo by S. Sousa, used with permission.

The photo above shows just how incredibly small this miracle peanut kit really is!!! Imagine a six to eight week old rabbit, still half the size of the littermates or smaller! Hard to imagine, I know!!!

Lastly, something to keep in mind is that the percentages listed above are for EACH KIT, not the litter as a whole unless the result is 100% foolproof. This means that each kit in a litter of, say, True Dwarf to False Dwarf mating, has a 50% chance of being True Dwarf. As such actual litter percentages may vary!

If you have any further questions, please feel free to comment below!
Posted by K. Lawrence, Wintertime Rabbitry at 3:25 PM